How to Assign Stereoisomer Configuration

Chirality is an important aspect of life.  This is so because many of metabolites used in living cells, in particular amino acids that form enzymes, are also chiral. Chirality contributes asymmetry to molecules, allowing them the ability to recognize “handedness” and further add to the complexity and specificity of reactions. Organic chemists must pay constant attention to the chirality of molecules both before and after reactions, less the compounds lose their biological or chemical activity.

We at StudyOrgo have developed clear cut explanations of Orgo Chem material for students to maximize your time studying and learn these difficult concepts quickly and easily. Sign up with StudyOrgo.com today for all of your organic chemistry studying needs!

IUPAC recommended in 1996 that a tetrahedral carbon bearing four different groups be called a chirality center.  Many other names are commonly used include chiral center, stereocenter, stereogenic center, and asymmetric center.  They all mean the same thing, a carbon connected to 4 unique substituents that is not superimposable on its mirror image.

When a compound is chiral, it will have one opposite molecule; a non-superimposable mirror image, called its enantiomer (from the Greek word meaning “opposite”). The compound and its mirror image are said to be a pair of enantiomers. The word “enantiomer” is analogous to the word “twin”. When two children are identical twins, each one is said to be the (“evil…”) twin of the other. Similarly, when two compounds are a pair of enantiomers, each compound is said to be the enantiomer of the other.  A chiral compound will have exactly one enantiomers, all other molecules with the same molecular formula and constitutional arrangement are diastereomers, but are only seen when there are more than two chiral centers in a molecule.

In order to determine whether the stereocenter is in the R or S configuration, there are a series of steps to follow.

1. Identify the stereocenter as 4 unique substituents attached to the chiral center

3. Rotate the molecule so that Priority 4 atom is in the hashed wedge position. 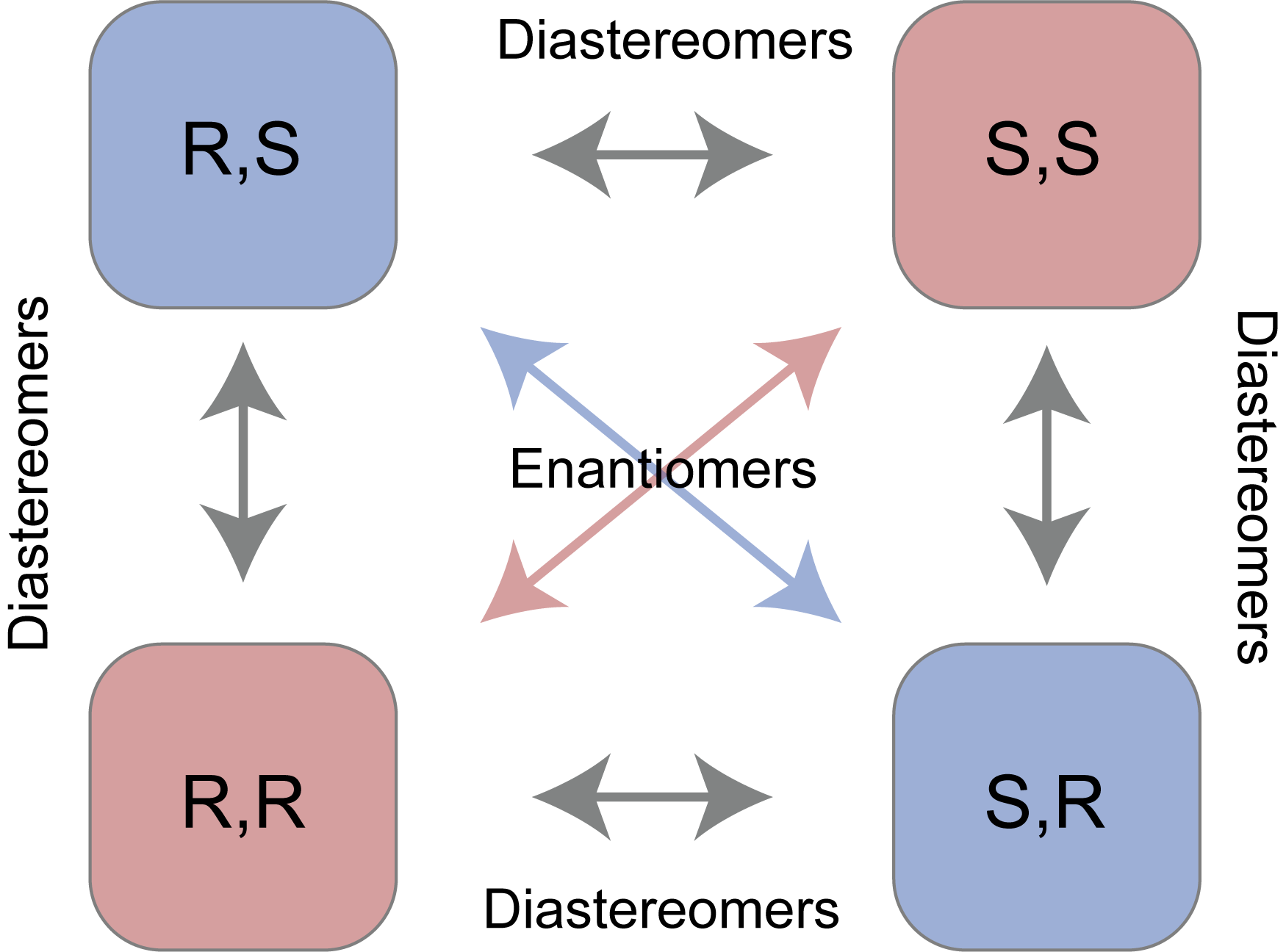 We now introduce the last concept to stereochemistry which is the difference between enantiomers and diastereomers.  Enantiomers are molecules with exactly opposite stereoisomers.  For example, the enantiomer of the molecule with stereochemistry R,R would be S,S.  The relationship between molecule R,R and R,S is what is described as diastereomers, which differ in some but not all stereocenters.