In the reaction with ammonia, why is water the acid?

In the reaction with ammonia, why is water the acid?

This is a great general chemistry reaction with important organic chemistry implications.  Another similar question is, why is water a base when reacted with an “acid”?  The answer to both question is: it’s all relative!  Here at StudyOrgo, we frequently get questions like this about topics in organic chemistry that are usually quickly covered, poorly described or expected that you know from previous courses.  These concepts are really important to understanding the more complex topics to come. With a membership to StudyOrgo, you will get even more tips and tricks on organic chemistry topics and detailed mechanisms with explanations.  Today’s blog is a preview of the detailed topics and materials available.  Check out a membership to StudyOrgo.com and sign up today!

Remember that in terms of acids and bases, there are two definitions; the Bronsted and Lewis definition.  Bronsted acids are defined as proton donors, while Lewis acids are defined as electron acceptors.  Both are acids, but what we think of differently is whether protons or electrons are involved.  In an aqueous solution, general chemistry or biochemistry, we mainly think of the Bronsted definition because the dissociation of protons from acids changes the solution concentration of H+, which we interpret as a change in pH and the “acidity” of the solution.  We measure the dissociation of the protons from acids, or the acceptance of protons by bases, with a numerical value which is the pKa.  The greater the pKa, the weaker the acid and stronger the base.  The lower the pKa, the stronger the acid and weaker the base. An easy trick for thinking of pKa is, place the protonated version of the molecule on the left and think of it as a proton donor.  The pKa tells you how easy this donation will be, the lower the number the easier the proton donation. 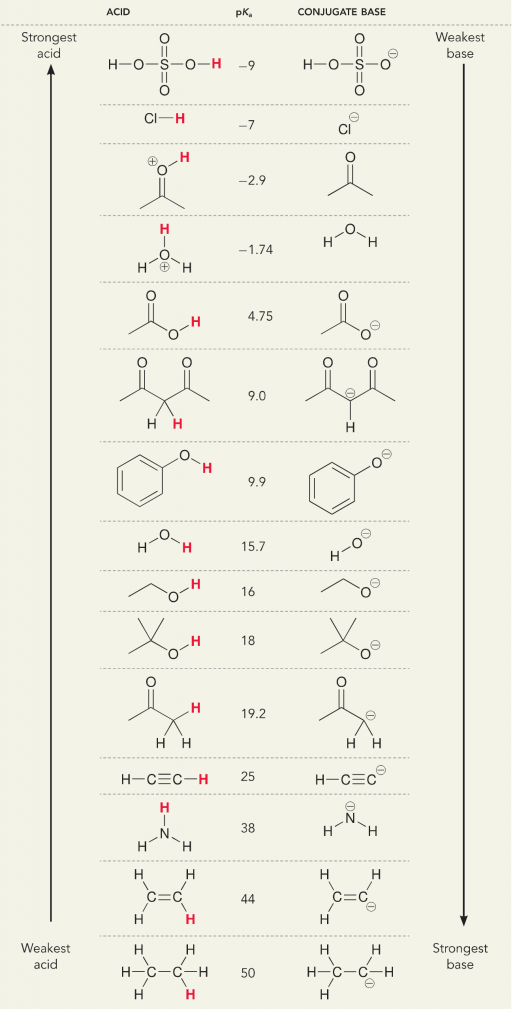 Let’s look at the ammonia and water reaction; the pKa for water is defined as 14.  The pKa for ammonia is ~37. 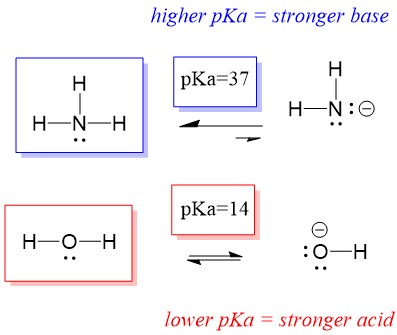 Therefore, because the pKa of water is lower than ammonia, it is a stronger acid the ammonia and will donate protons to the ammonia base.  This reaction leads water to become the conjugate base OH- and ammonia to become the conjugate acid NH4+.  Interestingly, this is why ammonia is a caustic agent, it produces hydroxide that reacts with stains and microorganisms to effectively clean and sanitize household items.

This is important as an organic chemistry concept because the strength of acids and bases in terms of electrons, or the Lewis definition, is exactly how we think about mechanisms of bond breaking and bond forming; the flow of electrons.  The strength of Lewis acids and the conjugated acid can help identify which direction a reaction will proceed.  We can see that the reaction of water an ammonia is unfavorable, but enough of the reaction occurs in reality to significantly reduce the pH of water (pH~11 with ammonia).

Let’s look at an acetylene reacting with a base to generate an alkynide ion, a useful nucleophile for C-C bond formation.  If we try to react sodium hydroxide with alkyne, alkynide ion WILL NOT be formed.  This is because the conjugate acid product of the reaction is water, which has a pKa of 15, is STRONGER than the original acid acetylene (pKa = 25).  Reactions ALWAYS favor formation of the weaker acid, or in this case, the reactant side.

If we change our base to sodium amide, which is a much stronger base, alkynide ion WILL be formed.  This is because the conjugate acid product of the reaction is ammonia, which has a pKa of 38, and is a WEAKER conjugate acid than the original acid acetylene (pKa = 25).  In this case, the reaction favors the product side!